The Beetles are coming!

This spring, the Klein family from Cologne/Germany faced the usual “problem”. Once the entry list for the ADAC Eifel Rallye Festival (July 24-26, 2014) had opened, entries kept coming in via all possible means including e-mail, fax and regular mail. Reinhard Klein, the head of the Slowly Sideways group, was busy with his inbox, commented: “We have received 200 entries but can only allow 150 cars, thus we had to sort the various entries. In order to achieve our goal and reach a maximum variety of cars, we have only accepted one identically-liveried example of a particular model but we have still reached 120 participants easily.” This in turn meant that some of the cars had to be put on the waiting list. But Klein also sees the positive side effect of the on-going boom: “The quality and originality of the cars has increased even further and we get even closer to our aim of showing the history of our amazing sport in an authentic way as possible.”

One special highlight of the Eifel Rallye Festival will be realised with the help of the Autostadt in Wolfsburg that will bring two of the famous Porsche Salzburg Beetles to the Eifel. Back in the 1960s and 1970s, the Austrian VW importer achieved remarkable results with the Beetles until the competition department was closed due to the oil crisis in late 1973. The Salzburg Beetles will also be featured during the Welcome Evening sponsored by the Autostadt. On Thursday night, Austrian film maker Helmut Deimel will show the best scenes from his documentary about this exotic rally car named “Power to the Beetle”. “We have not arranged all the details yet but we already know by now that these ‘Beetle stories’ will be a great addition to our festival”, says former World Champion co-driver, Christian Geistdörfer, who is now part of the organising committee.

Thirty years ago, Geistdörfer and his long-time chauffeur, Walter Röhrl, helped Audi to win the World Rally Championship with the legendary Quattro. In Daun, one of the original championship-winning cars will be re-united with the Drivers Champion from 1984, Stig Blomqvist. The Swede will drive the Quattro A2 in which he claimed second overall on the Monte Carlo Rally and first overall on the Swedish Rally of that year. The second car that will be coming from Audi Tradition is already a familiar sight on the demonstration stages of the Eifel Rallye Festival: This is the ex-Monte Carlo Audi Sport Quattro driven in 2013 and again this year by two-times German Rally Champion Harald Demuth.

For Björn Waldegård, Mercedes will once again open the doors of its museum, although it is not yet clear which car they will bring for the 1979 World Rally Champion. The Swede, who has been a regular guest of the Eifel Rallye Festival (and former Eifel-Rallye) for many years, turned seventy last November but still loves to have a ride in one of his former rally cars: “I think it is a little bit the same as being a good drummer, or a good man on a bicycle, except that cars are my sport. The feeling that you can control the car in high speed on different and difficult roads, that is what gives you the kick. And you see that I must like it as I am seventy years now and I am still doing it.” 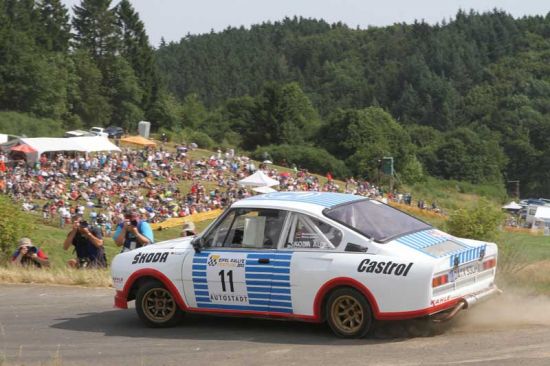 A newcomer to the Eifel Rallye Festival will be six-times Czech Rally Champion, Vaclav Pech Jun. For this demonstration event close to the famous Nürburgring race track, Pech will swap his regular Mini Cooper S2000 1.6T in which he was crowned champion last year for a real Group B super car. The Czech rally ace will drive a Ford RS200 which had up to 420 bhp when it fought against the Audi Sport Quattro E2, Peugeot 205 T16 E2, MG Metro 6R4 and Lancia Delta S4 in the 1986 WRC season.

Matthias Kahle, seven-times German rally champion, has only 130 bhp at his disposal when he drives a Škoda 130RS supported by Škoda Germany. But he has already shown last year that this is enough for some superb sideways action on the stages in the Eifel hills.

For the first time, fans from outside Germany can get weekend tickets and programmes in advance. Tickets and programmes for the Eifel Rallye Festival can be ordered from the new online shop which is available in three languages – German, English and French: www.eifel-rallye-festival.de/en/rallye-shop.html. Visitors seeking accommodation can also contact the Tourist-Information in Daun where there are English-speaking staff:-

The official DVD of the 2013 Eifel Rallye Festival
The official review shows the best action scenes on the 2013 event, highlights some of the most spectacular cars representing the theme “40 years of the WRC” and features the star drivers. Watch incredible onboard footage of former World Champions Walter Röhrl, Stig Blomqvist, Björn Waldegård and many others. Additionally the DVD contains bonus features showing the 150 cars in action. The DVD is available from www.rallywebshop.com at €19.95.